The word “hacker” is well-known to almost everyone these days. However, not everyone is aware of the entire concept of hacking – their targets, methods, motives and the different types.

Most people think that a “hacker” is a self-taught rogue programmer who is skilled at modifying computer hardware or software to use in ways outside the developer’s intent. This is a narrow definition that relates only to those who fit into the negative connotation of the term.

Before we look at all those different types of hackers, let us frame a definition first. Hackers seek to compromise digital devices such as computers, smartphones, tablets and even entire networks. While hacking isn’t always done for unlawful purposes, most references to hacking and hackers consider them to move with malicious intent, motivated by financial gain, protest, spying or even for the fun of the challenge.

In a world where every business needs to go digital to be run successfully, all devices need to be connected to the internet. In such situations where isolated computer systems won’t work, it exposes them to the outside world where hackers can interfere.

Now that the definition of hackers and what they do has been understood, let us have a look at the different types of hackers.

This is your typical criminal hacker. Black hat hackers have purely negative intent behind their actions. All their hacking activities are in a manner that can be deemed criminal or illegal. They work to find loopholes inside a network so they can exploit them.

They generally aim for monetary gain or fame and reputation. Once they hack into your system, they gain access to your personal, business and financial information. There’s no telling what a black hat hacker will do when he/she comes across such information.

The ying to the yang in the hacking world, white hat hackers are the opposing force against malicious black hat hackers. White hat hackers generally work with governments and organisations to fortify their systems. Also known as ethical hackers, they are cybersecurity experts who find vulnerabilities inside a system. Once they find such loopholes and exploitable issues, they work towards fixing them.

While not all white hackers apply fixes for the vulnerabilities found, some of them also take part in the remediation process. Such white hat hackers also help the system owners in employing other methods to prevent their system from being a target in the cybercrimes perpetrated by black hat hackers.

Just like the name suggests, these are hackers with a mixed intent. Like the colour code, they are not completely evil like black hat hackers, yet at the same time, they aren’t the do-gooders like white hat hackers.

Gray hat hackers generally surf the net and hack into systems. When they notice such vulnerabilities, they inform the network owner or administrator about such severe vulnerabilities. They extort the owners of the hacked systems, offering corrections to the existing defects at a certain price.

New joiners to the world of hacking, green hat hackers are all about learning new things. They stick around to learn new concepts and techniques used in a hack. They are people who want to become pro-level hackers in the future and are very curious to learn.

Focused on enhancing their skills, purple hat hackers try their own skills by hacking into their own devices. Using their own PC, they try to hack into networks to increase their hacking skills.

Read More: Cyber Crimes in the time of the Pandemic 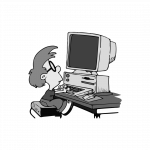 These are amateur hackers who don’t focus much on their coding skills. Script Kiddies download open-source tools and hacking codes that are made available on the internet. They carry out hacks using these downloaded tools. With code being a low priority for them, script kiddies don’t tend to do much damage due to the less amount of time invested in the hack.

These are hackers that are sponsored by a nation. They work to dismantle the cybersphere of another country or international agency. Often seen as an act of cyberwarfare, these hackers strike via sophisticated methods meant to deal damage.

Every institution has the chance of an insider turning rogue. This kind of hackers hacks to leak information existing on the system. What makes them special is that they do such acts while being part of the organisation.

As the name suggests, these are terrorists that work with terrorist organisations. They work to exfiltrate data from military and government targets. They also cause panic by halting public infrastructure, tampering with mobile servers and much more.

A combination of a hacker and an activist, these are people or organisations that work to bring about social change. They hack government organisations to gain attention and share their displeasure with certain decisions. This is usually done by hijacking the system’s official website and leaving their message on the website. A recent hacktivist attack was the one on the Chicago Police Station’s website by the hacking group Anonymous after the death of George Floyd.

Interested to learn more about the different types of hackers and how to become a pro-level one? Follow our blog to keep yourself updated with the latest trends in cybersecurity. We also provide training programs for those interested in starting a career in this field.

Free Cybersecurity Courses and Certifications of this Covid Times

3 thoughts on “Types of Hackers”